I returned a couple of weeks ago from my university trip to Los Angeles, California, and I honestly had the most amazing time! Here’s a quick idea of what we got up to:

Overall the trip was 12 days, this in my view was the perfect length of time to travel round the city. Los Angeles is effectively a wonderful place, the city is fresh, alive and kicking and I did really love it. However, I found that like most places, there was some questionable elements to it!

We started the trip by attending a fan convention in Anaheim called ‘Wondercon’, this was so cool and we were very lucky to get to see some film and TV panels such as Tolkien, The Big Bang Theory, Shazam and Dark Phoenix. These were an excellent idea as the audience felt that they were really experiencing something special and exclusive about the films and TV shows. Wondercon was also unique for its costumes, as you are walking round you will see Spider mans, Disney characters, Wonder Woman’s, and so many more niche and special designs. These people are really cleaver at transforming themselves into their favorite comic book or pop cultural icons. We also attended panels on Hair and Make up for screen, Set design, Journalism and a costume/talent show one evening. Overall Wondercon was pretty spectacular, if merchandise is your thing, there was a huge floor of books, clothing, art, replicas, toys, costumes, bags, hats literally anything you could want. The only thing I would say is three days was way to much for my friends and I to cope with there, I do love comic books and Marvel/Disney but maybe not for three intense days. We spent that last day at Wondercon walking round Anaheim and having lunch at an outlet shopping village called The Outlets at Orange, after deciding Disneyland was crazy expensive and you could spend a weekend at the Paris one for the price of a day in California!? 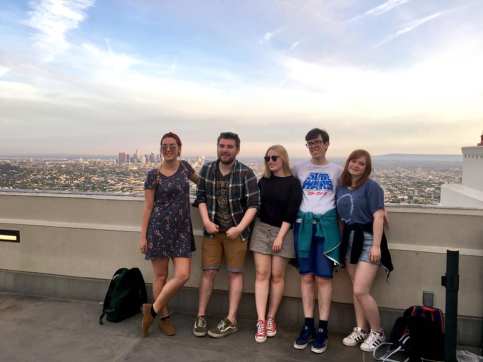 Next, we moved down to central Hollywood! While our hotel wasn’t amazing, it was so exciting because um Hollywood?! (we were all film and media students). While here we hiked up to the Griffith Observatory for sunset, visited Paramount Studios, Warner Brothers Studios, Universal Studios (There’s a lot of studios in LA) and took a little trip to the Oscars… or as its known, The Dolby Theatre! Which by the way is inside a shopping centre! The funny thing about the Dolby Theatre was that it didn’t feel that special at all once you were inside. I was expected to feel overwhelmed, but in all honesty, it is just a theatre, a very special one at that, but lets be real I simply couldn’t believe it was built into a shopping centre. On the night of the Oscars, they cover all the shops and the buildings so no one can read or see anything, so naturally you would never know without researching it or taking this tour! 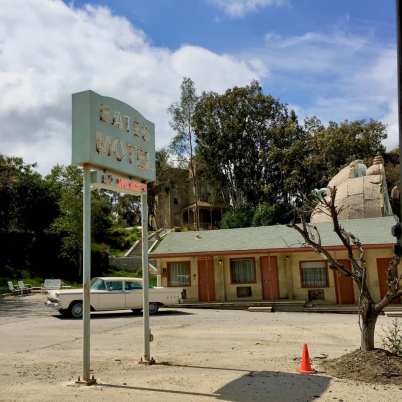 The studio tours on the other hand were completely amazing and I did feel like crying at one point when Warner Brother’s allowed me to hold a real Oscar from 1949! (They are heavy and shinny, soooo shinny) Warner Brothers also had a much bigger tour than any of the other studios, so I would recommend taking that tour over Paramount. At WB you can sit on the Friends couch, drink at Central Perk, walk round several sets, see costumes, interact with a short scene, and walk round an amazing prop house that I would love to live inside. Inside the prop house you will see the piano from Casablanca, a replica Resolute desk, and a Game of Thrones, well, throne.

Paramount Studios is really enchanting as well. The tour was slightly shorter than WB, but I’d still recommend it. Here you can see sets from current TV shows, some costumes and a pretty good film telling you what was shot there to the music of Forrest Gump! It weirdly had a cheap gift shop, I got a mug for $8. The backlot also had a brilliant New York set used in Breakfast at Tiffany’s!

Next up was Universal Studios, which I’ll admit probably wasn’t worth the almost £100 I spent on a ticket. However, the studio tour was incredible, it had built in rides and elements to the tour that made it really unique, you see so much: Bates Motel, Jurassic Park, Wisteria Lane, a flash flood set and an earthquake set, plus the plane crash from War of the Worlds (2005) which is actually a full sized plane. On top of this, is Harry Potter world and several other rides, Harry Potter was amazing and I loved it, yet the other rides were a little disappointing. Jurassic Park was closed and over all there are maybe 10 rides? It’s fine for a day out but the Orlando one is much bigger, but it was lovely being there with all my friends.

Finally it was time to move down to Santa Monica! After some trouble getting into an Airbnb, we eventually had a lovely apartment with big rooms and a balcony – perfection! We were nearer to Marina Del Ray so we walked to Venice beach from there and went into the Marina to look at the boats. The last weekend was so nice just having time on the beach to do what we wanted and to relax. We went to Santa Monica pier which bit of advice, don’t go at the weekend! At the end of the pier is Route 66, so we looked at that. Honestly Santa Monica is just nice for walking round and exploring, it’s a really chill place and we loved it! 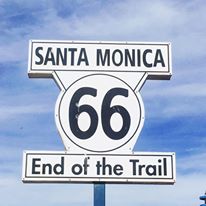 Over all that sums up the trip! I’d SO recommend going to LA, it was unique and crazy but we had an amazing time and I didn’t want to leave at all, you do have to be careful it’s incredibly big and the streets are usually very empty, but have your eyes open and take it all in, it’s defiantly an adventure.

4 hotels (including the airport for an early cheaper flight)

Tip: pre book everything (studios, tours, parks) and leave money for Uber, you will use it every day!