I was first introduced to an Ealing Comedy by my Grandfather, although I didn’t take much interest in it then, it wasn’t until I was at Sixth form that I truly understood the appeal of such films in their distinctive and explorative whimsical plots.

Ealing Studios was first established in 1902 when Will Barker bought the pretty and iconic white lodge for a hub of British filmmaking. The studio is proudly dubbed the ‘oldest running film studio in the world for film production’. In another tone, the studio has never taken a break, World Wars and all. It wasn’t until 1931 that the first sound stage was installed in the backlot opening up a world of opportunity’s after America broke into the sound market in 1927 with the Jazz Singer. By the 1940s, Ealing Studios was a roaring success, but everything changed in 1947. Hue and Cry is considered the beginning of the Ealing Comedies, the start to a ten-year explosion of sophisticated slapstick and downright sharp scripts. A total of 20 films were made in this decade, but that didn’t stop them making an impression.

Passport to Pimlico (1949) is a personal favourite. It’s a joyous bundle of a film that represents a society struggling after war. Although not a downcast moment captures this film in the slightest.  There is a ‘terrible’ heatwave over Pimlico (London), while the town’s residents discover a hidden cellar with local treasures and historical objects and of course a paper that declares Pimlico belongs to Burgundy. Pimlico becomes its own governed state with locals forming a court, and while this sounds boring, I can offer that it is far from it. The new residents of Burgundy soon discover that they are not subjected to war time rationing, stopping any form of logistics, the black market rises. Without spoiling the ending, the film ends with a heavy burst of rain that causes a swimming pool to form as residents leap into the fresh water out of the heat. 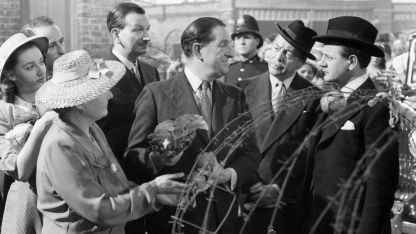 What is interesting about Passport to Pimlico is its direct attention towards the themes of post war life in London. When the war ended in 1945, rationing did not. Along with a blitzed-out city, and generations of men and women returning to their home, London would have felt very strained and alienated. People needed comedic films as a form of escapism from their every day life, and thankfully, Ealing provided that.

Michael Balcon headed the majority of Ealing comedies, and to his credit, he took the English stereotype and expanded it into a trend across the films themselves. When Hollywood was pumping out productions such as It’s a Wonderful Life (1946), All About Eve (1950) and Strangers on a Train (1951). All works of art on their own accord, Ealing was producing features that attended to the needs of the home audience it was realising it to. 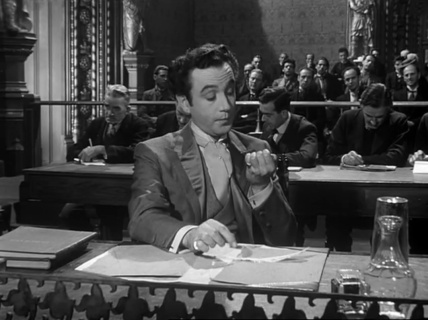 1949 also saw the production of perhaps the most well-known Ealing comedy, Kind Hearts and Coronets. Directed by Robert Hammer and with a cast of Dennis Price, Alec Guinness and Valerie Hobson, the film tells the story of Louis Mazzini, a poorer relation to the D’Ascoyne family. Louis works his way up the chain of the family tree, taking out anyone in his way, to become the head of the family. It is a proclaimed dark comedy, but in my opinion, it is one of the best. Kind Hearts and Coronets was entered into the 1949 Venice Film Festival where it was nominated for the Golden Lion. It is a sophisticated black and white masterpiece that highlights the Ealing comedies in the midst of a post war cultural loss.

Ealing Comedies offered something that was fresh and edgy, to an audience that was perhaps ready to see a little comedy in their lives. It also came at just the right time, with the start of 1950 representing a new decade and a new era for people to jump into.

As always, thank you for reading! If you have thoughts on these little cinematic history entries, let me know in the comments bellow and have a lovely day! ~ ScreentoSeen